Posted at 09:50h in Safety by Brett Solomon
0 Likes 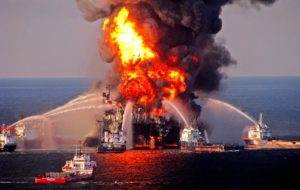 11 people lost their lives from the BP Deepwater Horizon explosion. This disaster ultimately cost BP $54 billion (R714,8 billion) in damages. Personally, I cannot help wondering if some of the executives grieve more over the loss of revenue than the tragic loss of lives. Please forgive me cynicism. In the last few months, two particular experiences have compelled me to re-evaluate how much I value people.

The first was when a colleague, who is the safety manager of a large mining company, fell off his ladder while doing some home repairs. He was badly hurt and needed surgery. During his stay in hospital, the mine sent him a gift pack and a card with everyone’s wishes for a speedy recovery. He was booked off work for several weeks to recover. Throughout this ordeal, his leaders were very understanding, supportive and sympathetic.

It wasn’t long after this that a mine worker also fell from a ladder. He suffered a broken arm and he, too, was rushed to hospital. The mine’s response was the complete antithesis of its response to the safety manager’s injury. It immediately launched an investigation to find out what went wrong and who was at fault. Watching from the sidelines, it was obvious that there was no real intent to learn from this unfortunate incident.

The senior managers were looking for a “fall guy” to blame for their tarnished safety record. No gift hamper was sent. No get well soon card. No hospital visits. He didn’t receive any expression of concern for his well-being. Having insight into both situations, the main difference was one happened at work and the other at home. One blemished the company’s safety record, and the other didn’t. If we were one of the leaders in this story, would our first thought be to hope that everyone was okay, or to find the culprit?

By no means am I arguing that incidents shouldn’t be investigated. Nor I am advocating that safety transgressions should be overlooked. My concern is that, in our endeavour to reach demanding production targets and quest for zero harm, we may sometimes forget that our workers are humans. They are not robots. They have feelings, personal challenges and ambitions to succeed, while also wanting to provide for their families. The way we interact and treat our teams has a tremendous influence on their performance and dedication to safety.

I recently saw this first hand while conducting a culture survey. While sitting in the comfort of air-conditioned offices, I was inspired by the senior manager’s aspiration to having a resilient safety culture. My optimism soon dissipated into a deep sense of disappointment, however. The morale amongst the workforce was discouraging. As I engaged them, I quickly found out why. One by one they told me how they wanted to do a good job, but over the years their commitment dwindled. Surprisingly, the repeated source of contention was over basic issues that could easily have been addressed.

Two main complaints surfaced during the interviews. The first had to do with the working conditions. There was a consistent lack of durable overalls and welders not having fire-resistant aprons. Artisans were unhappy because they didn’t have arch screwdrivers. And the proverbial straw that broke the camel’s back was that the crew had been working on a project for over a year while not having access to water or ablution facilities.

Both companies have value statements declaring their care for their personnel. Posters with common slogans like “people are our greatest asset” are visible throughout the mine. This is reiterated by others claiming, “safety first” or “safety is our number one priority.” Now, I am not talking about splurging money on every whim and desire. Yet, when mining houses are posting million-dollar profits, but aren’t willing to spend a few thousand dollars on portable toilets, necessary personal protective equipment (PPE) and tools, the message is clear: it is only about the money.

The second complaint was that the workers felt they weren’t appreciated. Their opinions didn’t matter. They weren’t given opportunities to give input into critical tasks they perform. When they did offer suggestions, they were quickly shot down. No wonder their enthusiasm had waned. They weren’t asking for exorbitant raises. They just wanted the essentials to be able to do their jobs safely in a humane way and to be respected as experts in their work. With these basic requirements being ignored, the workers felt that the mine cared only about making a profit. They felt their well-being was not a priority.

These are most probably extreme examples. However, companies should ask themselves whether, in small ways, they may be neglecting the welfare of your teams for greater profitability? Oh, before I forget, both mines had wellness programmes. We want our people to care and take responsibility for their work and safety. We need them to be switched on and engaged, but if we treat them as mere machines, why should they? Besides looking after their personal safety, why should they care about the success of the company?

Gallup’s study in 2016 found that companies that high staff engagement had 70% fewer safety incidents compared to companies with low scores. Such employees feel their work is important and contributes to the overall success of the company. They believe their opinions count and can add value, especially when it comes to identifying hazards and preventing incidents in their areas. The survey revealed that engaged workers are more committed to doing quality work. This includes adhering to best practices that prevent safety incidents.

The notion that leaders don’t need to care and appreciate their people because “they are paid to do their jobs” is flawed. Little things go a long way. Remembering names, asking for opinions and suggestions, small acts of appreciation, listening and showing compassion can significantly improve the levels of engagement. This, in turn, can have a considerable impact on a company’s safety and production performance. Managers should be asking themselves in what ways they can tangibly show you care for their employees.

Dr. Brett Solomon is the CEO of The Kinetic Leadership Institute and is a recognised leader in combining neuroscience, change management and leadership theory to drive cultural transformation processes. Brett specialises in neuroleadership, especially when it comes to understanding what drives human behaviour and how to influence it. He has been involved in numerous safety culture change initiatives in throughout SA, Australia, Canada and Saudi Arabia.